Women diagnosed with Hypoactive Sexual Desire Disorder (HSDD) – defined as a “persistent or recurrent deficiency (or absence) of sexual fantasies and desire for sexual activity” – often experience frustration, guilt and sadness, says Sheryl A. Kingsberg, PhD, Chief of the Division of Behavioral Medicine in the Department of Obstetrics and Gynecology at University Hospitals Cleveland Medical Center.

Sexual health is an important component of a person’s overall health, Dr. Kingsberg says. So lack of sexual desire or other sexual problems can have a profound effect on women and their relationships.

HSDD is probably best understood from a biopsychosocial perspective, she explains. From a biologic standpoint, the disorder could be a function of a neurochemical imbalance in the central nervous system. Dopamine and norepinephrine are two chemicals key to sexual desire and arousal. Serotonin, on the other hand, can dampen sexual desire and response. A deficit of the former two chemicals and/or a surplus of the latter can indicate a biologic etiology for HSDD, she says. Sex hormones, particularly testosterone, play a role in desire in women as well.

Psychologically and neurochemically, HSDD shares many similarities with depression, which has been correlated with a loss of sexual desire, Dr. Kingsberg notes. Like depression, HSDD can be traced back to a neurotransmitter imbalance, though this is not always the case. The disorder can also be linked to cultural issues, such as a woman’s religious beliefs or her interpersonal relationships.

HSDD can be caused by one or a combination of these three factors, and it only requires a brief inquiry to identify which factors may be compromised.

OPENING DOORS FOR DIAGNOSIS & TREATMENT
HSDD might seem like the realm of specialists such as Dr. Kingsberg, but she wants to change that perception.

“It is the responsibility of the primary care clinician, the gynecologist and any health care provider who has a working relationship with a woman to ask about sexual health,” she says. “Women are incredibly grateful and relieved when their provider – PCP, cardiologist, oncologist or any specialist – addresses sexual concerns or treatment consequences.”

Clinicians have a variety of shortcut screening tools at their disposal, such as the Decreased Sexual Desire Screener, to help determine if a woman has HSDD and what caused it. From there, the clinician and patient can work together to determine a plan of action. Would the patient benefit from psychotherapy or couples therapy? Would she benefit from a prescription medication?

If the cause of HSDD is determined to be primarily interpersonal or psychological, psychotherapy is the first line of treatment. Cognitive behavior therapy can help a woman alter dysfunctional thoughts, beliefs and/or behaviors that interfere with her ability to experience desire. But when a neurochemical imbalance is determined to be the primary source of lost desire, or a contributing factor, a pharmacological treatment will likely be useful.

There is only one FDA-approved medication for HSDD, Dr. Kingsberg notes. ADDYI® (flibanserin) is an oral tablet taken at bedtime. This drug decreases serotonin levels and increases dopamine and norepinephrine levels. Currently, the indication is for premenopausal women, but clinical trials have shown that is also safe and effective in postmenopausal women.

While ADDYI is the only FDA-approved option on the market, UH Cleveland Medical Center is involved in several clinical trials of other promising options, such as bremelanotide. This drug is a short-acting, rapid onset, “as-desired” treatment that is delivered with a subcutaneous auto-injector like an EpiPen®. Dr. Kingsberg anticipates that the positive results from the Phase III clinical trials will be published soon along with a submission for FDA approval. She is also currently recruiting postmenopausal women for a clinical trial investigating vaginal DHEA as a treatment for HSDD.

STARTING A DIALOGUE
While it is already 2018, many people are still uncomfortable talking about their sexuality, even with their most trusted health care provider. This leaves many women uncertain if and when it is appropriate to bring up concerns or questions during an office visit. It is up to the clinician to open that door, Dr. Kingsberg says. Just validating a woman’s right to have a healthy sexual life or inquiring about concerns already helps patients. 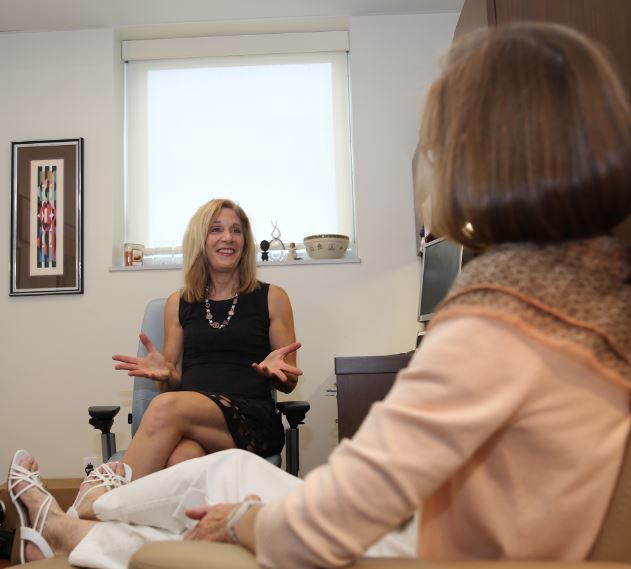 Asking about sexual health concerns during a consult is key to determining whether a woman has HSDD. From there, the clinician and patient can work together to determine a plan of action.

For those who aren’t comfortable having any further discussion after opening the door, Dr. Kingsberg encourages clinicians to refer women to specialists like her.

“UH is one of the easiest places for clinicians to open that door and inquire because that’s ALL they need to do,” she says. “We have readily available sexual medicine experts in the system.”