Keeping in Touch Through Healing

We2017 UH Annual Report to the Community and Report on Philanthropy

In his nondescript office filled with personal photos, plaques inscribed with historical quotes, and books offering inspiration, sits a basket of handwritten notes and pictures of patients who have kept in touch over the years with pediatric surgeon Edward M. Barksdale Jr., MD. 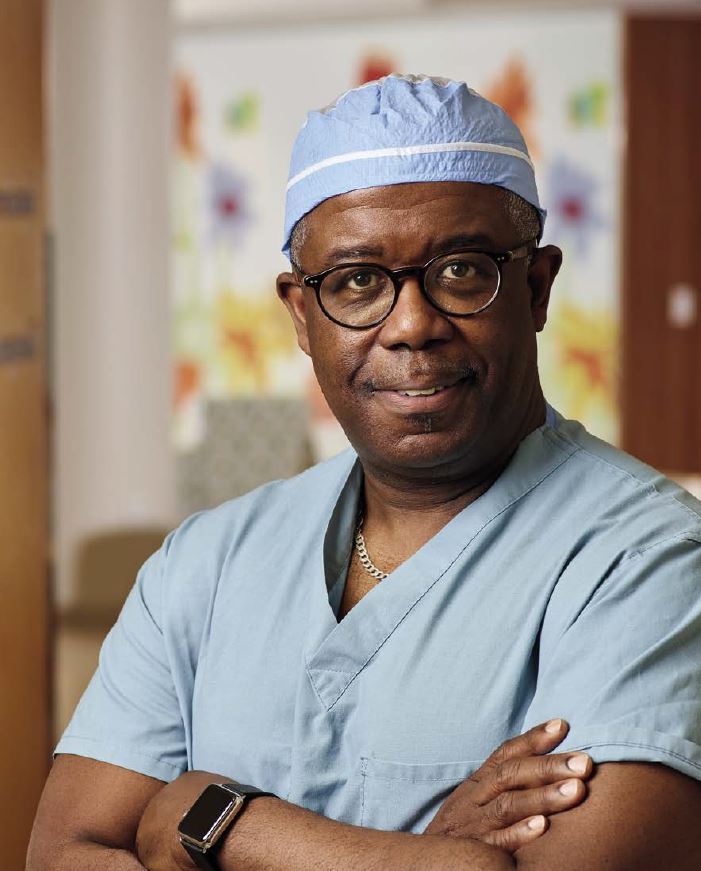 “I tell parents to forget my name after the surgery, but I don’t forget theirs,” said Dr. Barksdale, Vice Chairman, Department of Pediatric Surgery and Division Chief, Pediatric General and Thoracic Surgery, UH Rainbow Babies & Children’s Hospital, and Robert J. Izant, Jr., MD, Chair in Pediatric Surgery. “I read the notes the parents have written, and it empowers me.”

Beyond his technical skill as a boardcertified pediatric and adult surgeon, Dr. Barksdale is greatly impacted by his upbringing and his philosophy on life that extend into the compassionate care he provides his patients. “I have to connect with families, particularly mothers, and mothers don’t connect with ego,” he explained. “Part of developing to develop intrapersonal authenticity to show you’re real. I’ve often said that a mother will never allow you to touch her child, until you touch her heart.”

The connection is made through deep listening and being fully present with people – a skill Dr. Barksdale said his father practiced. “His life was to heal me when I was hurt, and to empower me to be strong. My goal with patients is to heal them when they’re hurt and to empower them to make them strong – and then different from my father – is to completely disappear from their life. I tell people my goal is to help them forget I ever existed.”

This ability to connect with patients can further healing, as noted in “ How to Heal: A Guide for Caregivers,” by Jeff Kane – one of the books in Dr. Barksdale’s office. “I have often told residents and the team, we cannot cure everyone – I do a lot of cancer surgery, but we can heal everyone,” said Dr. Barksdale. “Cure and healing are very different. Part of healing is that ability to find out what the needs of that individual patient are and to try to connect with those needs – through your technique and through your head, hands and heart – how to fill in those gaps in those people who have become broken.”

Dr. Barksdale said that so much of who he is today was influenced by growing up in the south. In the 1960s, Rev. Dr. Martin Luther King Jr. visited his family’s home to encourage them to advance civil rights through nonviolence, as his sister, Lynda, and a friend were the first to integrate E.G. Glass High School, in Lynchburg, Virginia. He said that although he came from a “barely working-class family,” failure wasn’t about whether he would go to medical school though. “For me, failure meant that my life wouldn’t matter,” he said. “My grandmother would say to try to just matter and to have an impact – and to do that in a way that doesn’t necessarily celebrate you as an individual.”

Upon recollecting the complexity of several patients’ surgeries, Dr. Barksdale said the UH ICU offers the highest level of technique and care. “It is an orchestra in a symphony of care, and it isn’t just me.”

He also stated that his mission is to value everyone he meets and to bring value to everything he touches. “I have long used the term high tech and high touch. I don’t think the two components are disconnected.”