Standing Up to Spinal Muscular Atrophy at UH

7 UH Annual Report to the Community and Report on Philanthropy

When 15-month-old Ja’Niyah Pinson lost her ability to sit, roll over and even hold her head up, her parents sought the advice of specialists at UH Rainbow Babies & Children’s Hospital.

Despite a diagnosis of 5q spinal muscular atrophy (SMA), the family now has hope for the future through the efforts of the UH Rainbow Spinal Muscular Atrophy Clinic team and a first-of-its-kind drug called Spinraza® (nusinersen). UH Rainbow was the first in Northeast Ohio, and only one of 123 medical centers in the U.S., to offer this advanced treatment.

SMA is a group of progressive and debilitating genetic diseases that can affect infants, children and young adults. In newborns, it is a leading genetic cause of infant mortality. Many patients never gain the ability to walk and lose other key motor skills, including sitting and moving their arms. Eventually, patients cannot breathe or swallow on their own. Before Spinraza was available for the treatment of 5q SMA (affecting 95 percent of patients with SMA), parents of children with the disease were only given instructions for supportive care because no treatment existed to stabilize the disease.

So, when Nancy Bass, MD, pediatric neurologist at UH Rainbow Babies & Children’s Hospital, learned about the life-changing effects of the spinal injection during the course of multiple trials in 2016, she asked Jessica Goldstein, MD, to join her to develop the UH Spinal Muscular Atrophy Clinic and begin Spinraza injections in patients. “We wanted to be able to provide this treatment for our patients with this disorder and become a center of excellence for this treatment,” said Dr. Bass.

“ SMA is a genetic disorder that results from a genetic defect in the survival motor neuron (SMN) 1 gene, so patients with the disease have a decrease in the protein SMN produced by this gene. There is also a back-up gene called SMN 2. Spinraza is a small piece of genetic material that inserts itself into the SMN 2 gene, and turns it on to make it produce more functional protein.”

In 2017, as UH Spinal Muscular Atrophy Clinic Co-directors, Drs. Bass and Goldstein treated 13 patients, both pediatric and adult, with remarkable results. Dr. Bass recalled her first meeting with Ja’Niyah. “She came to us as a floppy, hypotonic infant who was losing milestones,” said Dr. Bass. “She had learned to roll over and sit, but lost those skills. When I met her, she was very weak and couldn’t lift her arms above her head and couldn’t roll over at 15 months old.” 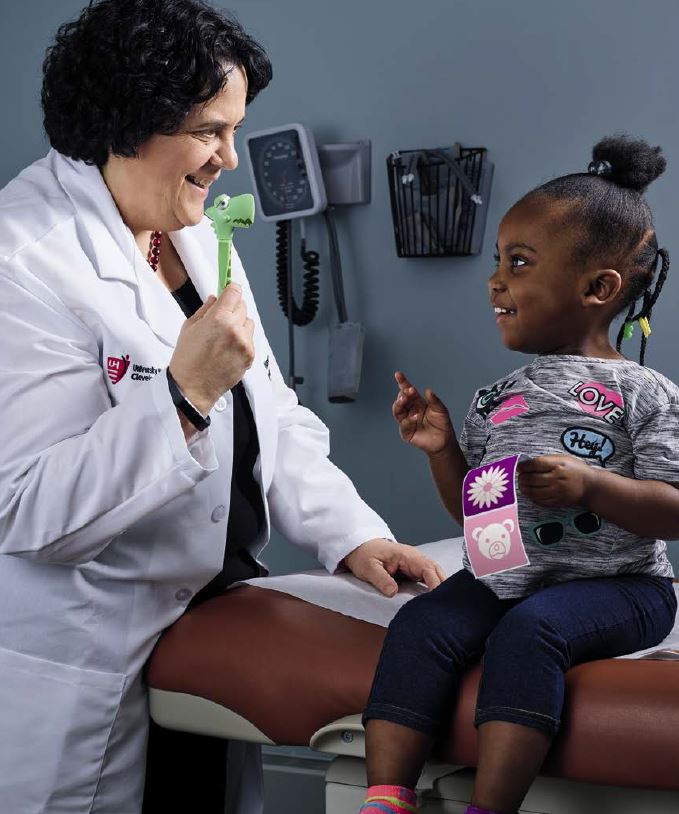 After her initial four doses of Spinraza, Dr. Bass said Ja’Niyah, now 2 years old, is reaching “amazing milestones,” such as sitting on her own and attempting to stand. “We have not seen this much of a response in any of our kids.”

“ I think Dr. Bass is a miracle worker,” said Ja’Niyah’s mother Satin Ross. “The first day I met her, she assured me right away that we would find answers concerning my daughter – even after the diagnosis when I was scared about what was to come.

“ Learning that there was a treatment for SMA made it a little easier to deal with, so I’m grateful for Spinraza and Dr. Bass. I know now with these treatments Ja’Niyah will be able to reach milestones she was unable to
reach before.”