She discusses regulatory burdens on hospitals 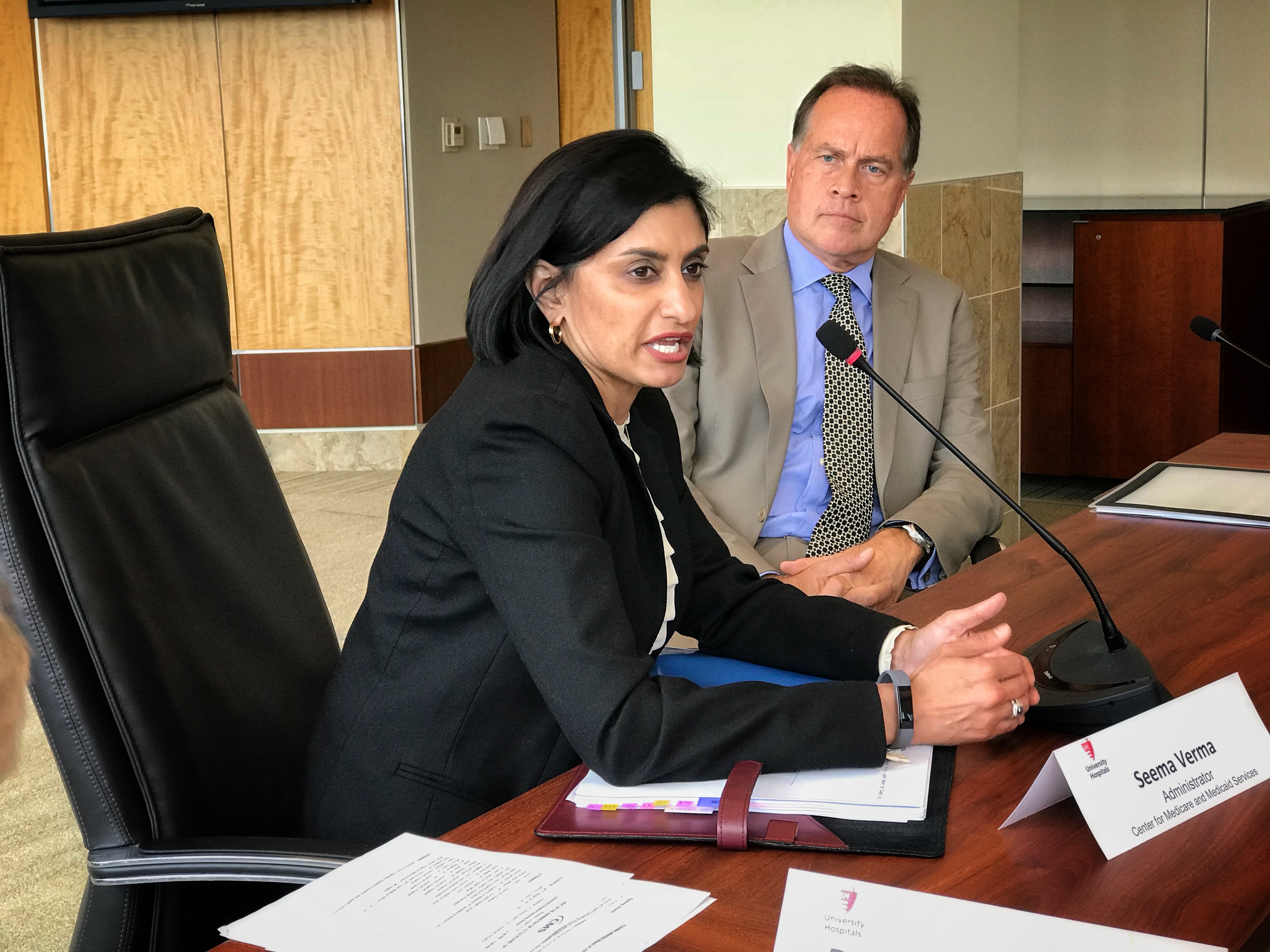 Her visit was part of a national listening tour on which she has embarked to hear from doctors and providers about how to reduce burdensome regulations so they can focus on providing high quality healthcare to patients. CMS is the U.S. Health Department agency that oversees Medicare and Medicaid.

While at UH, Verma visited the Quality Institute where William Annable, MD, UH Chief Quality Officer and Director of the institute, Karen Boyd, Director of Quality and Clinical Performance Improvement, and Erin Adams, UH Manager for Quality Public Reporting, answered questions from Verma about the hospital’s quality reporting processes and what her agency might be able to do to make it easier to comply with regulations.

Verma then participated in a roundtable discussion with UH leaders, including Dan Simon, MD, President of UH Cleveland Medical Center, other leaders from Northeast Ohio hospitals and the Academy of Medicine of NE Ohio, Ohio State Medical Association, Ohio Hospital Association and the Center for Health Affairs.

Heidi Gartland, Vice President for Government and Community Relations, said, “Administrator Verma saw firsthand how UH is an innovative leader bending the cost curve while increasing value and quality for Medicare and Medicaid. We are pleased Administrator Verma visited our campus to learn firsthand about CMS regulations that are burdensome and if removed could assure we continue to provide quality care.”

Verma has led the Centers for Medicare and Medicaid Services (CMS) since March 14 of this year. She was nominated for the post by President Donald Trump in November 2016 and confirmed by the U.S. Senate on March 13, 2017.

According to Wikipedia, Verma established her reputation with her work on Indiana's redesigned Medicaid program. She was the architect of the health insurance pilot program known as the "Healthy Indiana Plan" which received support from the Indiana legislature and passed into law in January 2008.

Verma previously was president, CEO and founder of SVC, Inc., a national health policy consulting company. She holds a master’s degree in public health from Johns Hopkins University and her bachelor’s in life sciences from the University of Maryland.

About University Hospitals / Cleveland, Ohio
Founded in 1866, University Hospitals serves the needs of patients through an integrated network of 18 hospitals, more than 40 outpatient health centers and 200 physician offices in 15 counties throughout northern Ohio. The system’s flagship academic medical center, University Hospitals Cleveland Medical Center, located on a 35-acre campus in Cleveland’s University Circle, is affiliated with Case Western Reserve University School of Medicine. The main campus also includes University Hospitals Rainbow Babies & Children's Hospital, ranked among the top children’s hospitals in the nation; University Hospitals MacDonald Women's Hospital, Ohio's only hospital for women; and University Hospitals Seidman Cancer Center, part of the NCI-designated Case Comprehensive Cancer Center. UH is home to some of the most prestigious clinical and research programs in the nation, including cancer, pediatrics, women's health, orthopedics, radiology, neuroscience, cardiology and cardiovascular surgery, digestive health, transplantation and urology. UH Cleveland Medical Center is perennially among the highest performers in national ranking surveys, including “America’s Best Hospitals” from U.S. News & World Report. UH is also home to Harrington Discovery Institute at University Hospitals – part of The Harrington Project for Discovery & Development. UH is one of the largest employers in Northeast Ohio with 27,000 employees. For more information, go to UHhospitals.org.