December 2017 marked an important milestone in University Hospitals’ history – the 70th anniversary of the world’s first successful human cardiac defibrillation. The landmark event defined the future of cardiovascular medicine and ushered in a new era of advanced cardiac life support. 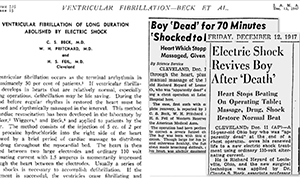 1947 newspaper articles regarding first use of defibrillator for patient care.

In December 1947, UH cardiac surgeon Claude S. Beck, MD, performed surgery on a 14-year-old boy to repair a congenital defect in the child’s chest wall. All went well until the end of the procedure when the boy’s heart went into ventricular fibrillation. A rhythm issue that causes the heart to quiver erratically rather than pump blood, ventricular fibrillation had been a fatal condition up until that time. Dr. Beck – a pioneer in heart surgery – began manually massaging the patient’s heart while he called for an experimental defibrillator that he had been developing in his research lab to be brought to the operating room.

Dr. Beck learned that physiologist Carl J. Wiggers – a colleague at Case Western Reserve University – had successfully maintained blood circulation in laboratory animals using manual massage of the heart followed by electric shock. Using that knowledge, Dr. Beck began to develop a cardiac defibrillator that could be used on humans. The device included two metal paddles that when placed on the heart delivered 1,500 volts of electricity through the muscle.

The first attempt to jolt the boy’s heart back into a normal rhythm did not work. Undeterred, Dr. Beck resumed manual massage of the heart and a short time later sent 1,500 more volts of electricity through it. This time he succeeded. The boy survived and went on to live a normal life.

Throughout the past seven decades, the technology originally developed at UH has continued to evolve. Implantable defibrillators the size of a human fist are commonplace today and hand-held automated external defibrillators (AED’s) are found in airports, businesses and many other public places.

Additional reading on the landmark surgery performed at UH in 1947 by Dr. Beck can be found in Scientific American magazine and the Case Western Reserve University historical archives.