Scientists have determined that fungus may play a key role in chronic intestinal inflammation disorders. They found that patients with Crohn’s disease tend to have much higher levels of the fungus Candida tropicalis compared to their healthy family members. A new review published in Digestive and Liver Disease looks at these findings and provides insights into potential new therapeutic approaches using antifungals and probiotics in the treatment of inflammatory bowel diseases (IBD) such as Crohn’s disease (CD).

“The human gastrointestinal (GI) tract is home to trillions of microorganisms, some beneficial and others potentially harmful. Recent advances in science have allowed us to identify the multitude of organisms inhabiting the GI tract and parse out those that play a role in IBD,” explained lead author Mahmoud A. Ghannoum, PhD, of the Center for Medical Mycology, Department of Dermatology, Case Western Reserve University and, University Hospitals Cleveland Medical Center. “Unfortunately, most research has focused on studying only the bacteria while overlooking a key player, fungus. In order to address this issue, we have focused our efforts on studying the fungal community in the GI tract known as the mycobiome.”

The review centers on a first of its kind study in which researchers characterized the gut bacterial microbiota (bacteriome) and fungal community (mycobiome) in a number of families that had members with CD and healthy relatives. They then defined the microbial interactions leading to microbial imbalance in the family members suffering from CD. They found that family members with CD had fungal (Candida tropicalis) and bacterial (Serratia marcescens and Escherichia coli) imbalances in their gut’s microbiome. Interestingly, they showed that these three organisms worked together to form robust digestive plaque biofilms capable of exacerbating intestinal inflammation. 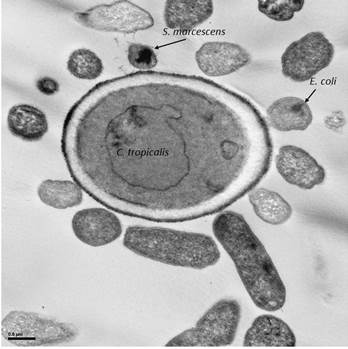 Although the relationship between bacteria and fungi has been recognized not only in our gut, but in our body at large, this study proved for the first time that bacteria and fungi actually work together to exacerbate the inflammatory symptoms in CD. These results provide insight into the roles of bacteria and fungi in CD and may lead to the development of novel treatment approaches and diagnostic tests for CD and other debilitating digestive issues. 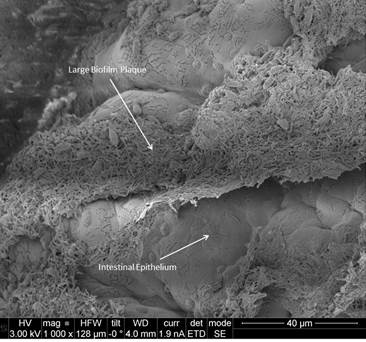 Scanning electron microscopy (SEM) image of a large biofilm plaque consisting of Candida and bacteria adhering to the intestinal epithelium.

Promising potential treatments could include using antifungals and even probiotics that are designed to balance both bacteria and fungi, while breaking down digestive plaque biofilms. Antifungals will control the overgrowth of fungi, while probiotics can help restore and maintain the balance of the microbiota, noted the authors.

“Our ground-breaking discovery that bacteria and fungi both play a critical role in health and disease has tremendous implications not only for understanding the disease process, but also for development of potentially life changing treatments for those who suffer from chronic digestive diseases,” concluded Dr Ghannoum.

Notes for Editors
The article is “The Mycobiome: Role in Health and Disease, and as a Potential Probiotic Target in Gastrointestinal Disease,” by Christopher L. Hager and Mahmoud A. Ghannoum (http://dx.doi.org/10.1016/j.dld.2017.08.025). It will appear in Digestive and Liver Disease, volume 49, issue 11 (November 2017) published by Elsevier.

Full text of the article is available to credentialed journalists upon request; contact Sybrand Boer Iwema at +31 20 485 2781 or hmsmedia@elsevier.com. Journalists wishing to interview the study authors should contact Mahmoud A. Ghannoum at mahmoud.ghannoum@case.edu.

About Digestive and Liver Disease
Digestive and Liver Disease is an international journal publishing papers on basic and clinical research in the fields of gastroenterology and hepatology. Contributions consist of Original Papers, Correspondence to the Editor, Editorials, Reviews and Special Articles, Progress Reports, Image of the Month, Congress Proceedings, Symposia, and Mini-symposia. www.dldjournalonline.com