Ultrasound, a technology that took a back seat to computed tomography and magnetic resonance imaging in recent years, has re-emerged as a cutting-edge tool in improving the diagnosis of neuromuscular problems.

“Ultrasound is not replacing electromyography (EMG) and nerve conduction studies in patients with neuromuscular disorders, but is instead an important complement that provides essential information about the etiology of patient conditions,” says David Preston, MD, Vice Chairman, Department of Neurology, University Hospitals Cleveland Medical Center.

“It is painless and cost effective, doesn’t expose patients to radiation or gadolinium, and, in many cases, facilitates earlier diagnosis and treatment initiation,” Dr. Preston adds.

Along with his wife, Barbara Shapiro, MD, PhD, Dr. Preston has written a textbook on neuromuscular disorders and is one of four experts in the rapidly expanding use of neuromuscular ultrasound at University Hospitals.

THE RE-EMERGENCE OF ULTRASOUND
There are a number of factors spurring the re-emergence of ultrasound, Dr. Preston says.

First, higher resolution probes and improved software now yield better results. Second, ultrasound machines have gone from costing several hundred thousand dollars to being in the range of what an EMG machine costs ($30,000 to $40,000). They also have become much smaller, making it easier to move them from room to room.

As these benefits add up, ultrasound is becoming more prominent in a greater number of specialties today. For example, it is used by anesthesiologists to improve accuracy of nerve block placement, by emergency physicians to assess trauma patients quickly and in by orthopaedists to visualize joints dynamically.

NEUROMUSCULAR APPLICATIONS
The increased use of ultrasound for neuromuscular studies has its roots in work done in the 1980s by doctors working with boys who had Duchenne muscular dystrophy. These doctors realized that ultrasound could visualize the profound muscular changes these patients were experiencing, becoming their preferred way to determine which muscles to biopsy.

There has been an explosion of research and innovation in this field over the past decade, prompting major medical centers across the country to look for ways to integrate it into their clinical practices. Dr. Preston and his colleagues Bashar Katirji, MD, Christopher Geiger, DO, and Komal Sawlani, MD, are at the forefront of that work. UH also has incorporated ultrasound training into its neurology fellowship and residency programs.

One setting in which neuromuscular ultrasound is valuable is identifying the source of pain in patients with a mononeuropathy, such as carpal tunnel syndrome. In these cases, ultrasound is typically followed up with an EMG and nerve conduction study.

“While the EMG study can tell you how well the nerve is working, neuromuscular ultrasound can show us the actual etiology,” Dr. Preston says.

UH has employed neuromuscular ultrasound for about three years. Dr. Preston cites several examples in which it has dramatically altered patient care. In one example, a young boy presented with a gunshot wound in his posterior thigh with paralysis below the knee. EMG indicated a severe problem with the sciatic nerve. However, ultrasound revealed that the nerve actually was being impinged upon by a large piece of bone that was removable surgically.

“We would never have known that before,” Dr. Preston says.

In another case, a woman presented with a complete wrist drop that emerged upon waking in the morning. She was unable to lift her fingers and had numbness of the back of her hand. An EMG study indicated that it was likely from compression, perhaps due to sleeping on it in an awkward position, a problem that would normally resolve on its own. However, a subsequent ultrasound identified a large synovial ganglion cyst in her upper arm, which was removed without delay. 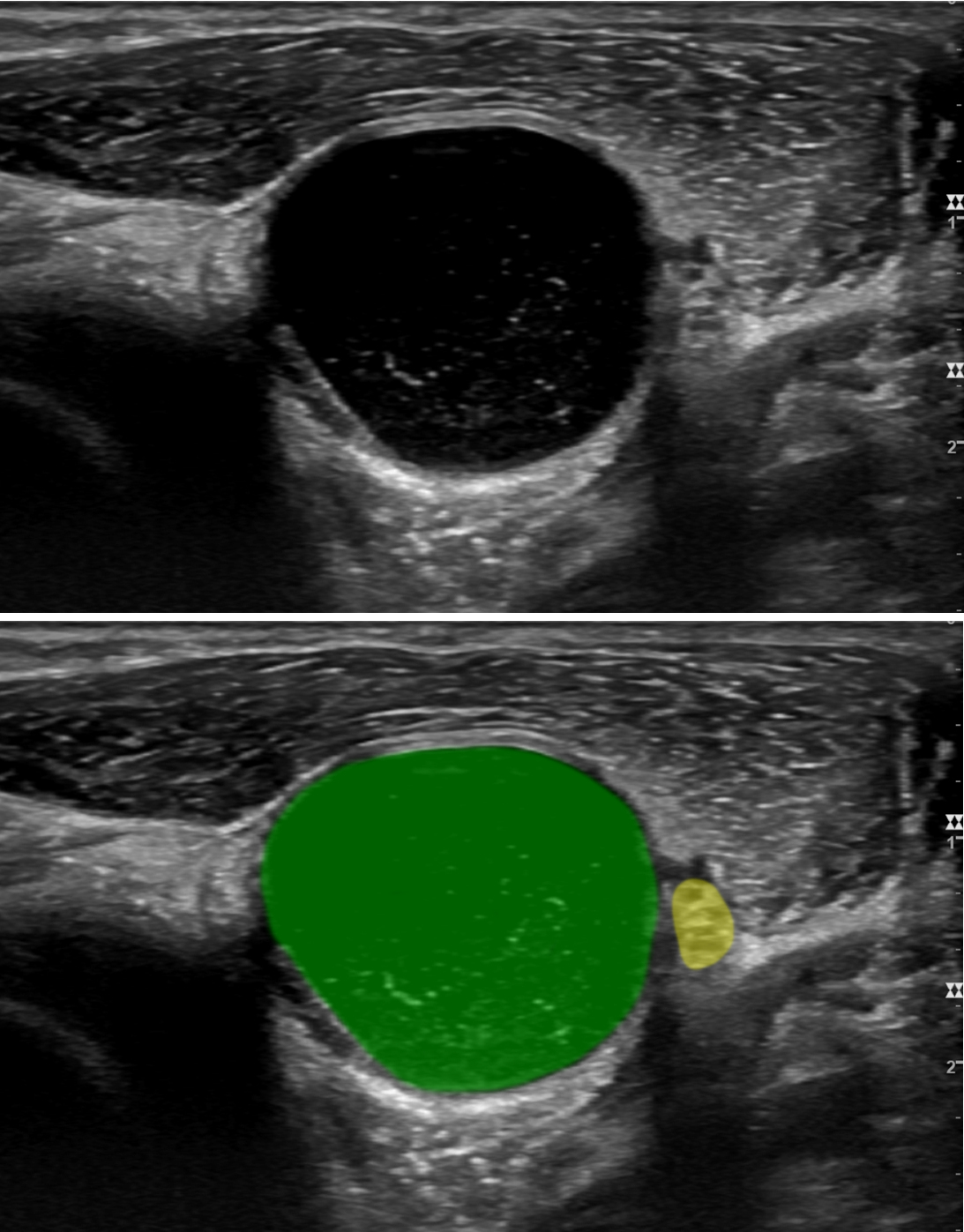 Image Caption: A large ganglion cyst (green) is displacing the radial nerve (yellow)
near the elbow. Patient awoke with marked weakness of wrist and finger
extensors. Clinically, she had a radial nerve lesion. The thought was this
was external compression and she must have “slept on it funny.” The ultrasound
demonstrated that it was actually a large ganglion cyst compressing the radial nerve.
This was then surgically corrected.

“These are just two examples of how neuromuscular ultrasound adds valuable anatomical and pathological information to a diagnostic workup,” Dr. Preston says. “It has dramatically changed how we look at things.”

For patients with peripheral neuropathy, who often present with numbness, tingling and weakness in their extremities, there are more than 100 possible diagnoses. While diabetes and other conditions are the most common, some will have chronic inflammatory demyelinating polyneuropathy (CIDP).

“It is very important to differentiate CIDP from other problems because it’s potentially treatable,” Dr. Preston says. “EMG and nerve conduction are pretty good at making this diagnosis, but their findings can be equivocal. However, the enlarged nerves that are indicative of this condition are very easily seen on ultrasound.”

DIAGNOSING MUSCLE DISORDERS
Ultrasound is also valuable in diagnosing muscle disorders, he continues. “Muscle disorders can have many causes and some can be diagnosed based on the specific patterns of which muscles they affect. Ultrasound is very good at revealing that information,” Dr. Preston says.

For example, a patient with progressive weakness of her arms and legs was confirmed as having a muscle disorder via electrical and laboratory testing, but the etiology remained a mystery until ultrasound showed that her forearm flexor muscles were abnormal. This led to a diagnosis of inclusion body myositis.

Neuromuscular ultrasound is administered at UH Cleveland Medical Center, UH Chagrin Highlands Health Center and UH Suburban Health Center. The procedure can be scheduled in the Ambulatory EMR under Orders, Procedures, Neuromuscular Ultrasound, or an order can be faxed to 216-983-0792.